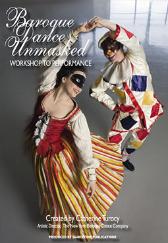 The DVD provides a rare look at the artistic process in re-creating dance and dance-theater, from studio to stage. Included, there is information about Baroque music, fencing, mask work, notation, costumes, and the inner life of dance performers working in this dance style.

It features brilliant performance excerpts which reveal the most important theatrical dance styles of the 18th century: the danse heroique, the demi-caractère, and the comic/grotesque style. The dancers are in period costumes and perform with an original instrument ensemble, Concert Royal.

Catherine Turocy is internationally recognized for her contribution to the current revival of 18th-Century ballet. She was decorated by the French government in the Order of Arts and Letters and received the prestigious New York City BESSIE AWARD for Sustained Achievement in Choreography.

She has been commissioned to choreograph over forty opera productions with the New York Baroque Dance Company in France, England, Germany and the United States. As a stage director, she has mounted works in New York City, Spoleto Festival USA and in Goettingen, Germany. Ms. Turocy’s ballets have been filmed for French, Japanese and American television and featured at many international venues.

HOPSDance Volume I with Tyce Diorio and Krista Saab DVD 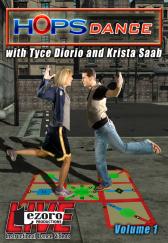 HOPSDance Volume I with Tyce Diorio and Krista Saab DVD

HOPSDance and Dance Mix are unique dance instructional programs that incorporate creative staging as a road-map for learning. If you have ever played any dance platform games or want to learn to dance, you may notice one thing is missing.... live instruction. This is where HOPSDance is unique. You receive live dance instruction to help you better understand and learn the fundamental basics of dance!

Ideal for the beginner dancer and a great tool for teaching kids, HOPSDance will introduce you to different styles in a way that's fun, creative and easy to grasp. Tyce Diorio and Krista Saab will take you through combinations in jazz, hip hop, theatre and Latin Dance using the mats in various formations to help guide the steps and teach you spacial awareness.

They'll also take you through basic across the floor progressions to introduce some fundamental technique. Learn from them and then challenge yourself to be the choreographer! You have the freedom to place the mats in many different formations and create patterns that are visually breath-taking. Great for large group numbers!

HOPSDance is a fun and energetic program that gets your heart-rate up and your body moving in an innovative new way. As per Tyce and Krista's instruction on the DVD, you can: 1.) Use a HOPSports mat; 2.) Tape your floor in the configuration of the mats or even just make X's on your floor; or 3.) Learn and perform the Choreography without the boundries of the mat. NOTE! All the choreography can be learned and performed without the HOPSports Mats as well!

Tyce Diorio has danced with notable artists such as Janet Jackson, Paula Abdul, Jennifer Lopez, Samantha Mumba, and Ricky Martin. He was a featured dancer on The American Music Awards, The Oprah Winfrey Show, Saturday Night Live and performed as a soloist in the hit Broadway show "Fosse". Some of Tyce's TV and film credits include, Showgirls, Starsky and Hutch, 13 going on 30, and Mr. and Mrs. Smith starring Angelina Jolie and Brad Pitt. He had the opportunity to be featured in the U2 iPod commercial featuring their hit song “Vertigo.” Tyce has also been a featured Choreographer for the FOX Summer Sensation “So You Think You Can Dance" and is on faculty with THE PULSE ON TOUR.

Krista Saab is originally from Toronto, Canada. She has been a Radio City Rockette in NYC for 5 years and is currently performing in the Revival of "Pal Joey" on Broadway. Select credits with the Rockettes include the Macy’s Thanksgiving Day Parade and The Ellen Degeneres Show. Krista’s career in both concert dance and theatre has taken her around the world performing in shows such as “Camelot –PBS Live From LincolnCenter”, “Carnival”, “42nd St.” and the Ovation Award winning cast of “Crazy for You”. She has taught workshops at Radio City Music Hall in NYC and has worked with legendary performers such as Stevie Wonder, Hinton Battle, Jason Alexander, Stockard Channing and Gabriel Byrne. Krista can also be seen as a dancer in the feature films “The Great Observer” and “American Gangster”. 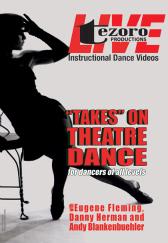 Andy Blankenbuehler: A Vaudeville Charleston is a dynamic theatre dance style incorporating the energy and performance of classic musical comedy. This dance, choreographed by Andy Blankenbuehler, focuses on personifying the sharp, humorous and exciting accents and rhythms of this particular period of music.

Isolating tight drum hits, lengthening through the long wail of a trombone, or shaking to match the syncopation of a piano run, this choreography offers the dancer a clear blueprint for building an exciting performance from the 1920's.

This choreography is best suited for the intermediate to advanced dancer.

Eugene Fleming: Enjoy the innovative choreography of Eugene Fleming whose Broadway career spans more than a decade. This Savoy Strut is a combination which captures the very essence of theatre dance.

The Strut is reminiscent of the 1940's when Harlem was in its heyday. Its smooth, sleek, tight movements allow the dancer to express the exuberance of the era.

This choreography is best suited for the beginner to intermediate dancer.

Danny Herman: Danny Herman teaches a classic jazz combination that is a tribute to the legendary Jack Cole, the choreographer who virtually invented the theatrical jazz dance idiom.

This choreography is suited for the intermediate to advanced dancer. 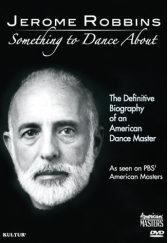 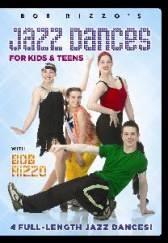 Join Broadway instructor Bob Rizzo and his young dancers to learn four dynamic routines for beginner through advanced levels. There are a variety of styles including hip hop, musical theatre, jazz, and broadway!

Guest instructor Renee Rogers joins Bob to teach a high-energy advanced solo. Each routine is performed to music, followed by step-by-step breakdowns shown from the back.

Bob Rizzo has taught dance for the undergraduate program at New York University, Broadway Dance Center and at STEPS on Broadway. You've seen his dances in commercials for Levi's 501 Jeans, Kellogg's Pop Tarts and Teddy Grahams. He holds the distinction as choreographer for three New York City based soap operas: As The World Turns, All My Children and The Guiding Light. Bob was featured on the cover of Dance Teacher magazine, and is an active member on the Advisory Board of Dance Spirit magazine.

Bob Rizzo presents his newest and coolest Music Jam yet!

This CD features all the music for the routines on the following DVDs: Jazz Dances for Kids & Teens with Bob Rizzo, Tap & Glide with Mark Goodman, and Street Groove with Derek Mitchell. In addition there are many more tracks of fully orchestrated music for use in class and routines.

Learn the latest Broadway moves with veteran Broadway dancer and Award winning choreographer, Christopher Gattelli. Christopher presents three Fosse-inspired routines created for all levels. Dances concentrate on style, technique, formations and use of props. Great for the classroom as well as onstage. Each polished dance is packed with character, sensuality and dynamic flare.

Christopher Gattelli ‘s choreography credits include the Tony Awards, The David Letterman Show and The Rosie O’Donnell Show. As a performer he has danced on Broadway in Cats, How To Succeed and Fosse.

See also the Music Jam CD that contains the music for this video!

Creating dynamic choreography can be an insurmountable challenge whether you're a studio teacher creating a jazz dance for a recital, a modern dance teacher preparing for your school's annual concert, or the director of an elite performing group getting ready to compete.

Janet Roston shows you how to utilize the basic principles of choreography to create dances with IMPACT! This unique video incorporates both modern and jazz styles to illustrate a variety of ways to create powerful choreography that will excite your audience! Integrate these concepts into your classes as well as on the stage. Make a difference in your choreography NOW!

Also, check out our Jazz, Tap or view all our Dance Videos and DVDs.

Recommend this Musical Theatre Dance Video and DVD page to a friend.