Regarded as the "Father of American ballet", and having created 425 works, George Balanchine is, arguably, the foremost choreographer of the 20th century.

Originally produced for the PBS series, DANCE IN AMERICA, Balanchine celebrates his artistry and pays tribute to the themes of his ballets. Through rare archival audio and video footage, interviews, film, and photographs, the program traces Balanchine's life from his youth at the Maryinsky Theater, through his work for Hollywood and Broadway, to his creation of the New York City Ballet. It also examines his thoughts on dance making, using interviews with the choreographer himself, and features selections from many of his ballets, including Chaconne, Agon, Symphony in C, Apollo, A Midsummer Night's Dream, and Western Symphony, among others. 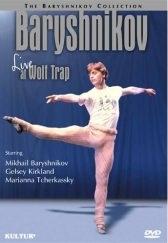 This 1976 live performance showcases the incredible Mikhail Baryshnikov, at the peak of his talents, shortly after arriving in the West. The video features Baryshnikov in solos and pas de deux with a variety of ballerinas, including Gelsey Kirkland, his first great U.S. partner. The program also includes Misha's spectacular leaps and spins in Don Quixote. This is the live event Baryshnikov's fans have been waiting for!