Ballet Videos and DVD - Nutcracker, Rambert, Raymonda, Road to the Stamping Ground, Romeo and Juliet, An Evening with the Royal Ballet and Russian Ballet Highlights. 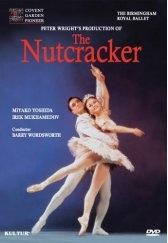 Peter Wright's version of The Nutcracker is a wonderfully lavish production and an absolute delight for all viewers. The magical tale is wonderfully played with fantastic clarity and the sets and costumes are sumptuous without being overly ostentatious.

The Nutcracker - The Story of Clara DVD

In a stunning departure from tradition, Graeme Murphy transforms Nutcracker into a production which is uniquely Australian.

The ballet is the story of Clara, once a famous Russian ballerina, who first came to Australia in the 1940s. It chronicles her turbulent, nomadic life; and is a moving tribute to all of the dedicated artists who forged the ballet tradition Australia.

Tchaikovsky’s much-loved score and Olivier award winning designer Anthony Ward’s stunning sets and costumes with sizzling choreography. Promising a fresh serving of the traditional Christmas fare, Matthew Bourne’s Nutcracker! is a delightful feast for all of the family.

Fantasy and magic are the essential ingredients of The Nutcracker, and Tchaikovsky’s imaginative score helps bring to life the fantasy world of E.T.A. Hoffmann’s enchanting story of The Nutcracker and The Mouse King. Gennady Rozhdestvensky is the guest conductor who …”drew ravishing playing from this most ravishing of Tchaikovsky’s ballet scores.” (Guardian)

Though the original scenario for The Nutcracker was considered to be fatally flawed, this magical work has survived to become one of the firmest favorites in the ballet repertory. This new production by Artistic Director of Sadler’s Wells Royal Ballet, Peter Wright, with the help of Tchaikovsky ballet expert, Roland John Wiley, attempts to rescue from far-flung archives surviving evidence of the original Ivanov/Sergueyev staging, combined with some captivating modern stage effects.

Maya Plisetskaya, prima ballerina of Moscow’s Bolshoi Ballet, is the subject of this documentary. Containing some rare footage of her as a child, it covers the development of her career and shows highlights from some of her greatest roles. Included in this film are scenes from Swan Lake, Raymonda, The Stone Flower, Romeo and Juliet, Don Quixote and others. A fascinating look at a world famous dancer, Plisetskaya Dances chronicles a career which has been little seen in the West, offering some important insights into the Soviet dance world. This film has been the recipient of many international awards.

Sir Kenneth MacMillan's glorious version of The Prince of the Pagodas provides a fascinating and magnificent spectacle of classical dance on the grandest scale. Nicholas Georgiadis' enchanting designs complement Britten's only ballet score by establishing a fairy tale ambience, and Darcey Bussell produces a dazzling performance as Princess Rose. "The principal players are magnificent. A grand achievement". THE FINANCIAL TIMES.

ACT 1 – Ludmila Semenyaka is magnificent as the youthful, charming Raymonda, niece to the Countess Sybil de Daurice of France. Raymonda is engaged to the gallant knight Jean de Brienne, who is superbly portrayed by Irek Moukhamedov. Because he must immediately depart on a campaign with King Andrei II of Hungary, the youth comes to the castle to bring his fiancée gifts and to bid her farewell. That night as Raymonda muses on her beloved, a statue of the White Lady, patroness of the House of Daurice, appears in a vision. She beckons the girl to the Magic Garden of Dreams, where Jean awaits her. But the apparition suddenly disappears, and in Jean’s place there is an unknown, exotic Eastern knight, who makes a passionate declaration of love to the bewildered Raymonda, when she faints, the knight vanishes. As dawn breaks, Raymonda awakens in the belief that her dream has been a terrible omen of her destiny.

ACT II – A celebration is underway at the castle. Among the guests is the Saracen knight Abderakhaman, performed by the electrifying Gedeminas Tarands. In him the terrified Raymonda recognizes the mysterious stranger she saw in her dream. Though he promises to give her riches and power in return for her heart and hand, she rejects him. Aberakham tries to abduct Raymonda. Unexpectedly however, Jean and the other knights return from their mission. To resolve the differences between Jean and Abderakham, King Andrei proposes a duel of honor. Aberakhman is defeated and Jean reclaims the overjoyed Raymonda.

ACT III – Raymonda and Jean are married at the court of King Andrei. In honor of the monarch, Hungarian dances are performed during the wedding festivities.

“… Matchless for its dramatic power … and Ulanova’s Juliet is unforgettable.”- Clive Barnes.

An historic performance by the legendary Galina Ulanova highlights this lush production of the ever-popular ballet. Choreographed by Leonid Lavrovsky and conducted by world famous Gennadi Rozhdestvensky, this film is rich in detail and characterized by its lovely interior and exterior location work. Yuri Zhdanov is the young Romeo to Ulanova’s unforgettable Juliet. A great ballet is here filmed paying great attention to all the values: musical, choreographic and scenic. This remastered version eliminates the narration that heretofore had interrupted Prokofiev’s score at critical points in the ballet.

Choreographer Jean-Christophe Maillot's version of Romeo et Juliette downplays the social and political ramifications that most 20th century choreographers have interpreted in Shakespeare's play and concentrates on the emotional violence inherent in adolescent sexuality.

Sir Kenneth MacMillan's Romeo and Juliet has long been one of the greatest successes in The Royal Ballet repertoire, winning worldwide acclaim as an impassioned and thrilling view of Shakespeare's tragedy and of Prokofiev's glorious score. His sensual choreography poignantly captures the conflict between blossoming love and cankerous revenge.

“One again the Paris Opera Ballet offers one of the most beautiful performances you could ever hope to see … very moving … Shakespeare is well served!” Le Parisien. “… a splendid recreation, totally faithful to Nureyev, this Romeo and Juliet is one of the great events of the year” Le Figaro.

Evening with the Royal Ballet DVD

This program immortalizes a gala evening of classical ballet featuring the legendary team of Rudulf Nureyev and Dame Margot Fonteyn. Britain’s Royal Ballet is one of the world’s most celebrated dance companies, thrilling us for over 30 years with a legacy of stunning performances. An Evening With The Royal Ballet has been critically acclaimed as “a chance to view the pinnacle of ballet achievement.”

This program features excerpts from immortal favorites including Le Corsaire, Les Sylphides, the Sleeping Beauty and La Valse. Frederick Aston’s choreography is brilliantly executed throughout. This is one evening ballet lovers will enjoy over and over again.

Highlights From The Royal Ballet DVD

Highlights From The Royal Ballet features stunning performances from one of the world’s leading ballet companies. This wonderful compilation showcases the talent of Anthony Dowell, Lesley Collier, Wayne Eagling, Alessandra Ferri and many others in superb productions of popular ballet favorites.

Stars of the Russian Ballet DVD

“We will never see dancers quite like this again.” – Clive Barnes.

The first part of this film features Galina Ulanova in excerpts from Tchaikovsky’s Swan Lake. Utilizing dazzling special effects, this production takes full advantage of the artistic qualities of the cinema, rather than merely recording the event. This is truly an historical film document, for it is the only existant tape of Ulanova as Odette.

The second part of this three-part ballet film contains a most unusual event, a one-of-a kind sequence in which two of the world’s greatest ballerinas, Galina Ulanova and Maya Plisetskaya, dance together in a memorable performance of B.V. Asafiev’s ballet, The Fountain Of Bakhchisarai. This is the only filmed record of these two great dancers performing together and it provides a unique opportunity to compare their different styles.

The great Russian dancer Vakhtang Chabukiani is featured in the third part of this film in a performance of B.V. Asafiev’s The Flames Of Paris, which is a colorful homage to the French Revolution. This film also features the soloists and ballet troupe of the Bolshoi Theatre, and soloists, ballet troupe, choir and orchestra of the Leningrad Opera and Ballet Theatre.

Recommend this Ballet Videos and DVDs page to a friend - choose email in orange share box.