Our store has moved to here: Hip Hop Video and DVD Store 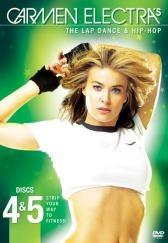 Designed with personal trainer Michael Carson, Carmen Electra’s Lap Dance & Hip Hop Workouts comprise the Volumes Four & Five of her Aerobic Striptease series. Building on the striptease-inspired dance moves from the first three volumes, these films teach viewers what lap dances are and adapts them into the context of an intense exercise workout, as well as introducing a vigorous & rigorous Hip-Hop Dance with a firm emphasis on cardio.

This DVD features Matthew Morrison now starring as Mr. Schuester on the FOX hit series, GLEE. So dance along with Matthew and New York City's hottest instructor Suzanne D., to learn the latest in Hip Hop and Funk style dance.

The class begins with a funky warm-up, followed by some jammin' variations and combos to get you into the groove, and finally a full length, cutting edge Hip Hop dance that's fresh off the streetz of New York City. Each section is broken down slowly from both front and rear views for easy learning.

Suzanne DiNunzio teaches at many of the prominent studios and clubs in New York. Her Multi-Groove classes that combine Funk, Jazz, Latin and African dance are always jammed to capacity. She also performs with Manhattans hottest Hip Hop Group, Culture Shock.

Music from this video available on Music Jam CD Vol. 1.

Warm-up with street-smart combinations on the rooftops of New York City! Then jump into the studio to "get down" with 3 Ultra Funky routines. Suzanne and her dancers perform each energizing dance to the music and then break it down showing both front and back views. Rated "F" for fantastically Funky.

Music from this video available on Music Jam CD Vol. 1.

Get groovin' with Seth Stewart as he teaches you his fun and funky Hip Hop style. Learn a short warm-up, kool practice moves, & an energetic routine full of fresh, street smart choreography. Whether you're a seasoned professional, or just want to freestyle at home, Seth’s moves will keep you dancing for hours. A great gift idea for the aspiring hip hopster!

Seth Stewart recently performed as a featured dancer in Madonna’s Re-Invention tour. He appears in the video, Me Against the Music with Madonna & Britney Spears, and dances in New York City at The Alvin Ailey School.

Hip hop dance is sweeping the world in music, movies and clubs. Now you can learn these hot new dance moves, burn calories, and have fun doing it with “Off Da Hook Hip Hop Aerobics”. Fenton “F-Troop” Fulgham lays down some slamming choreography with a warm-up, 2 easy to follow routines and a heart pumping bonus challenge. The DVD includes a bonus CD with all the funky beats you need to turn up the heat in your living room, church, or community center. It’s not your mama’s aerobic workout! When the instruction ends the party begins and it’s “Off Da Hook”!

What’s F-Troop Style? It’s the hot new choreography by Fenton “F-Troop” Fulgham! And you can learn his 4 high energy hip hop dance routines and a bonus old school routine with this step by step instructional DVD. With dance there’s music, and we’ve got Demi Lovato’s new hip hop single “Moves Me” that is sure to be a hit. You’ll be able to perform like the star you are when you take the Bonus CD to parties, recitals and competitions. The fun doesn’t stop there - we have Demi’s new music video and special bonus footage included. When the instruction ends the party begins and it’s “Off Da HooK”!

The “Off Da Hook Hip Hop Series” is a five disc DVD set filled with fun vibrant choreography, also a bonus CD and phat crystal bandanna seen on all the hottest hip hop royalty. Whether you’re a hip hop connoisseur, first time beginner or exercise enthusiast, this set has got something for every dance level. When the instruction ends the party begins and it’s Off Da Hook!

Flying in the air, it’s a bird ... it’s a plane .... no it’s Gregg Russell bringing you the Ultimate Hip Hop of the year. This informative and entertaining video contains three fun routines for beginning, intermediate and the advanced hip hop dancer. His super powers include easy to follow breakdowns, fun energy and sharing respect to the new art form of hip hop. So dance freely around the house, and get your “groove” on; Gregg is here to help you!

Gregg Russell is an Emmy nominated choreographer who was a guest performer and choreographer on the Disney show “Even Stevens”, “Buffy the Vampire Slayer” and “Third Rock From The Sun”. He danced in the films “Newsies” and “Clueless” and in commercials for The GAP. Gregg has also performed with such recording artists as Sugar Ray, Smash Mouth and Reba McIntyre. He currently teaches at Edge Performing Arts in Hollywood, and has formed an L.A. tap club, TapSounds Underground.

See also the Greg Russell's Music Mix CD that contains the music for this video!

Janet Roston returns with four new, unique hip-hop combos that will get you in the hottest groove ever! Janet invites two of L.A.’s top hip-hop choreographers, Brad and Bosco, to share their moves with you. The result? Four fresh combos each with their own style!

Janet teaches two combos; one an intermediate/advanced urban routine. The other, Hip-hop with a Latin edge! Bosco presents a combo that’s quick and tight with a feel that’s pure music video. Brad brings you the latest L.A. trend, Clowning and Krumpin’. You’ve seen it in music videos and commercials, now learn this outrageous style.

Finally, Janet shows you how to combine the four routines into non-stop choreography that will blow the roof off your studio or performance! 2 full hours of slammin’ moves!