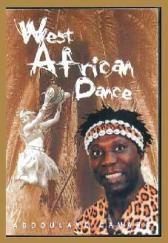 Experience the power of moving to the irresistible dance grooves of West Africa. African Dance is intense, centering, uplifting and ecstatic. The roots of Hip Hop and many other popular dance styles can be found in these traditional steps.

Join dancer/choreographer Abdoulaye Camara of Guinea, West Africa as he takes you step by step through five dance routines. Abdoulaye has taught students of all ages for many years and is especially skilled at breaking down steps into simple movements.

Dances included on this DVD are Yole, Kuku, Tiriba, Mandiani and Telefone. Students may chose which dance they want to learn or "play all" and get a great workout by going through all five without stopping. Each dance chapter is presented in three segments: 1 - Dance steps are broken down and taught one at a time; 2 - The entire dance is shown from the back view; and 3 - The dance is performed up tempo by Abdoulaye, front view.

YOLE - A traditional mask dance from the Temne people of Sierra Leone near the Guinean border. It is danced by young and old at nearly all festive occasions.
KUKU - From the forest region of Guinea, a rhythm originally used to welcome initiates back into the village.
TRIBA - A welcoming dance of the Baga people of north western Guinea.
MANDIANI - A traditional Malinke rhythm from eastern Guinea, originally danced by the young girls of the village before coming of age.
TELEFONE - A recently composed rhythm and dance, Telefone refers to the role the drum plays in bringing people together as well as the communication between the drum and the dancer.

Jason Hann is an International percussionist in every sense of the word. He has toured and recorded throughout the world with an amazing variety of global musicians including Prince Diabate (Guinea), Hassan Hakmoun (Morocco), Mansour (Iran), Aloke Dutta (India), Khaley Nguwell (Senegal), and Prince Eyango (Cameroon).

Artists that he has worked with in the U.S. include String Cheese Incident, Vinx, Rickie Lee Jones, Darius Rucker (of Hootie), Andre Crouch, Zoo People, Brian Hughes, Alana Davis, and the legendary Isaac Hayes. His highlight solo performance was in Istanbul where he accompanied his own DJ set with live percussion, and included guests from the famous Turkish band Mogullar.

SOKO - Traditional rhythm of the Komanko people of Guinea’s Faranah region. In a traditional context it is played for and danced by the uninitiated during the months preceding the male initiation rite. Today it is popular throughout Guinea for weddings and other ceremonies.
SOLI - From the Malinke ethnic group, traditionally used during the circumcision ritual that proceeds a boy’s initiation into manhood. The fathers elect the wise man who will watch over the circumcised boys throughout their initiation, which lasts four weeks.
SINTE - From the Susu ethnic group of coastal Guinea, danced all year round at various village gatherings.
YAMAMA - From the Susu ethnic group, also called “Mamaya”. The women of the village get together once a year to honor the female spirit of Yamama. On this occasion they ask her for what they will need in the coming year; more rain, plentiful harvest, fertility, etc.
KASSA - A traditional Malinke rhythm from Upper Guinea played at all events linked to harvest as well as to encourage farmers as they plant and harvest their crops. The workers may have to walk miles from field to field and Kassa is sometimes played while the workers walk to the next field.
TELEFONE - A more recently composed rhythm from Guinea. Both rhythm and dance were created by Master Sekouba Camara in 1995. Telefone (French spelling) refers to the roll the drum plays in African culture which is to bring people together. Before the telephone people used drums to communicate from village to village. 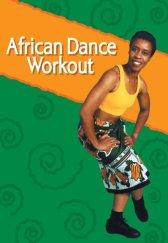 The music which fuels the dance is a mixture of African and Caribbean rhythms and melodies. You may find it more comfortable working barefoot only if you are accustomed to taking class that way. However, wearing good, supportive sneakers will aid in supporting all lower body joints. Try wearing your lappa, kanga or sarong to get into the style. Drink water throughout the workout and if movements feel uncomfortable, feel free to modify them. Make sure to control your motion and you'll feel the intensity.

Dances of Ecstasy - A Sensory Journey Though Rhythm, Dance and Music DVD 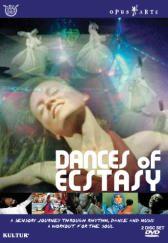 Dances of Ecstasy is a mesmerizing journey into the world of ecstasy experienced through rhythm, dance, and music. It's a visual and aural feast for the senses blending exciting dance rituals, hypnotic imagery, interviews, and a spellbinding global music soundtrack.

Orisha priestesses from Nigeria and Brazil and shaman healers from the Kalahari and Korea pulse to the same beat as thousands of young people at an all-night techno dance party in an Australian forest. The many different experiences of trance are linked by the human need to connect with a spiritual dimension.

Enjoy four illuminating documentaries about various rituals portrayed in the film, or select the filmmakers' audio commentary which describes their experiences while shooting all around the globe. Finally, there is the opportunity to have a closer look at Sufi Dervishes' whirling ritual in an extended portrait of this fascinating ceremony.

DVD 2 - Join in and 'do it yourself' with a complete Power Wave workout by New York urban shaman Gabrielle Roth, or dance your own dance to the global grooves tracks, with psychedelic visuals by D-Fuse. There are also two hidden bonus videos by One Giant Leap and James Asher. 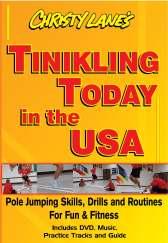 Tinikling is a traditional folk dance that originated in the Philippines. It is performed by jumping and dancing over long poles to music. It has become a popular fitness activity in schools and with youth groups. It is a fun and effective way to work the cardiovascular system while learning rhythm, balance, strength and coordination. Today it is performed to contemporary, fun music!

This DVD and CD-Rom combination pack includes the basic techniques, skills, drills, music, guide and 3 great routines to make your Tinikling experience easy and fun to do! Written and produced by national dance educator, Christy Lane.

Gypsy Heart: The Heart and Soul of Flamenco Dancing DVD