Learn how to play soccer and get ready for the next FIFA World Cup with instructional videos. Super Soccer Skills, Backyard Soccer Games and Worldcup to the Backyard. Learn soccer from Carla Overbeck, Tiffeny Milbrett and Joy Fawcett. Futbol con Mayte. 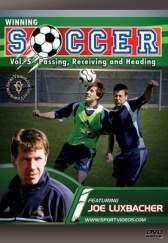 To maximize group performance, players must effectively combine their individual efforts and abilities to create one smooth functioning whole. Passing, receiving and heading skills provide the vital thread that enable 11 teammates to play as one. Mastery of these skills will enable teammates to maintain possession of the ball, dictate the tempo of the game and ultimately create and finish scoring opportunities.

This DVD provides coaches and players with a variety of exercises designed to improve their ability to pass, receive and head the ball effectively and is an essential training tool for players and coaches at any competitive level.

Planning a practice that motivates players to learn, train hard, and most importantly, enjoy the game is a fundamental responsibility of every soccer coach. Players of all ages and ability levels want to be excited, enthused, and entertained while they learn. They want to become better players, but they also want to have a good time in the process. Young soccer players in particular will derive the most benefit from practices that are challenging and fun, from exercises that are activity oriented, from games in which they are constantly moving, touching the ball and scoring goals.

This DVD provides coaches with a variety of games that will nurture the technical, tactical and physical development of their players. The games are competitive, fun to play and can be easily adapted to a wide range of ages and abilities.

The modern 3-5-2 is one of the most popular systems in soccer today, and Coach Lauffer presents a complete guide to this system for you! Lauffer shows how to use the 3-5-2 in both offensive and defensive situations, creating width from the inside out, and forcing the opposition into uncomfortable situations. He demonstrates how to defend against midfield attacks and switches, transition, counter-attack, and other basic principles. Finally, Lauffer shows several field exercises that you can use as a teaching progression for your team. Understanding the modern 3-5-2 will help your team play more effectively on both ends of the field and allow you to win more games!

Tactical Flexibility with the 4-2-3-1 System DVD

Flexibility is key for any successful soccer team. In back-to-back NCAA Elite 8 appearances, Butch Lauffer has utilized the 4-2-3-1 system which allows his teams tactical flexibility on the offensive and defensive ends of the field. In this DVD, Coach Lauffer demonstrates how this system can be adjusted for stronger defensive or offensive formations, the roles of the players, winning the ball, transition, angles of recovery, pass timing, and attacking. Coach Lauffer also shares several field exercises than can be used to develop the 4-2-3-1 for your team. Using this system will give your team greater flexibility, will help your team break down opponents, and win more games!

Tactical Flexibility with the 4-2-3-1 System

With John Cossaboon, Southern Methodist University Head Women's Soccer Coach, '04 WAC Champions. Coach Cossaboon, who has coached at the professional level internationally and has helped develop Olympic talent, teaches how to control midfield play by effectively getting players through the midfield and into the attacking third of the field.

During this on-field demonstration clinic presentation, Cossaboon uses a progression of drills to improve athletes' ability to get through the midfield with dribbles and passes and by changing the point of attack and swinging the ball. Cossaboon uses 2 v 2, 4 v 4, 5 v 5, and 7 v 7 situations to teach players to move to open space, lose defenders, communicate, have vision and focus, and use soft passes to penetrate through the midfield. Through this video, Coach Cossaboon will help you teach your players to reduce playing "racehorse" soccer, straight up the field, and use different points of attack and angles to pick apart the defense!

Attacking is a major part of being able to score in soccer matches. You can have the best shooters in the world, but if they do not get open, they will never score! In this demonstration clinic DVD, Hyndman shares drills designed to improve your players' chances of scoring by teaching them how to attack. Coach Hyndman takes you through two training activities designed to develop an attacking mentality. He then demonstrates his 1-on-1 drills with a defender at half-speed. Then he steps up the competition one level at a time until it is a full 8-on-8 drill. Coach Hyndman goes through a total of nine drills for attacking. This is an outstanding DVD on the topic of attacking taught by one of the best teachers in the game today!

This former UNC standout who played for legendary UNC coach Anson Dorrance, shares her knowledge and expertise on the effective 4-4-2 Off-Balance Offense, which she has implemented successfully at Tennessee since the 2000 season. Coach Kelly uses a marker board presentation and on-field demonstration to diagram and demonstrate the complete 4-4-2 Off-Balance Offense. This offense is designed to combat the ever-popular 4-3-3 Offense used at all competitive levels of soccer.

Kelly begins by outlining player positioning, detailing each player's position, roles, and responsibilities putting emphasis on creating proper spacing and creating advantage situations. She also emphasizes the importance of transitional play, using the free player shift to create width, confusing and exposing the defense, and learning when to attack and pass. Kelly effectively uses the X's and O's to shed light on this creative way of playing a well-developed system!

Baseball, Basketball, Football, Golf or view all our Sports Videos and DVDs