Learn how to dance Lindy Hop or Shim Sham dancing from Frankie Manning and Erin Stevens. 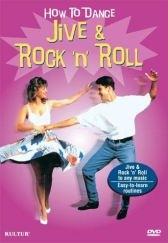 Learn to dance jive and rock ‘n roll in this step-by-step program from the comfort of your own home with this great how-to DVD.

How to Jive: This program is packed with dance moves that look good and are easy to learn featuring champions of modern jive, ballroom jive, European rock ‘n roll and the lindy hop, with music by the Firebirds. So grab a partner and get ready to bop.

How to Rock 'n Roll: Learn these unbelievable dances with British and European Dance Champion Kav Kavanaugh. In this easy to follow step-by-step program, you will learn basic acrobatics and advance rock ‘n roll moves. Featuring music from the original 1950’s band, The Cobras, you will learn to rock the night way!

Also, check out our Oldies, Steppin', Disco, Ballroom, Country Western, Salsa, Swing or view all our Dance Videos and DVDs