What are the dance steps for Waltz? Waltz is a smooth dance. Waltzes are characterized primarily by its rise and fall action.

How to Dance the Waltz

Waltz is a smooth dance, traveling around the line of dance. It is characterized primarily by its rise & fall action.

The shoulders move smoothly, parallel with the floor, not up and down.

The head should turn in the direction of the turn, otherwise the man's head is upright and looking over the right shoulder of the lady.

The American Waltz is similar to the International style except it has both open and closed dance positions. This allows the American style dancer a unique freedom of expression, including the ability to showcase character and theatrical presentation.

The slow waltz is danced to music written in 3/4 meter with 30 - 32 measures per minute.

Rise and Fall in Waltz

The rise and fall is unique to the waltz. If possible, all the the steps in the waltz should be long.

On the first step forward, the weight is taken on the heel, then on to the ball of the foot.

A gradual rise to the toes should be started at the end of the first beat, and continued to the second and third beat of each bar of music.

Lower to the normal position at the end of the third beat by lowering to the heel of the foot which is carrying the weight. 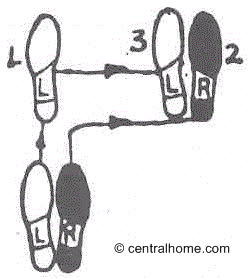 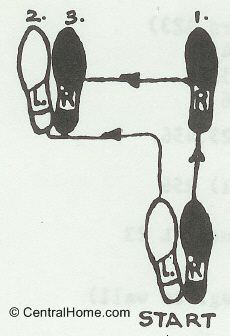 The basic waltz steps looks like a box on the floor. The basic step is called the Left Box. It is a combination of the Left Foot Change (forward) and the Right Foot change (backwards or against the line of dance)

The Box Step can also have a slight amount of turn, from 1/8 to 3/4 turn. The turn is used to turn corners or stay in a small area on a crowded nightclub dance floor. 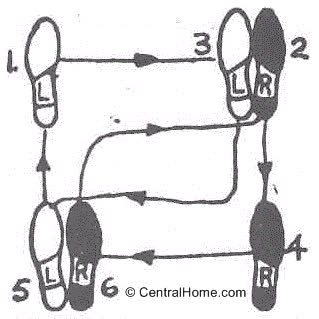 The man is in closed dance position in front of the woman, facing line of dance. The woman is slightly to the right.

1. Step forward with the LF.

2. Step forward with the RF so that right foot is parallel to left foot.

5. Step back with the LF so that the left foot is parallel to right foot.

2. Step back with the LF so that the left foot is parallel to right foot.

4. Step forward with the LF.

5. Step forward with the RF so that right foot is parallel to left foot. 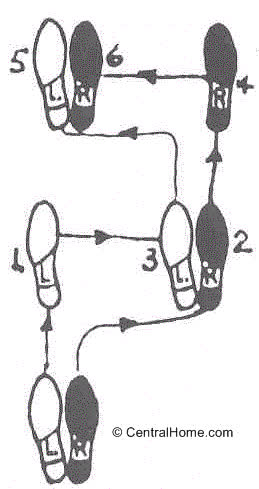 Jake Fuller is a staff writer for Centralhome.com.

Waltz History - How old is Waltz?

Next in Steps: Waltz Steps 2